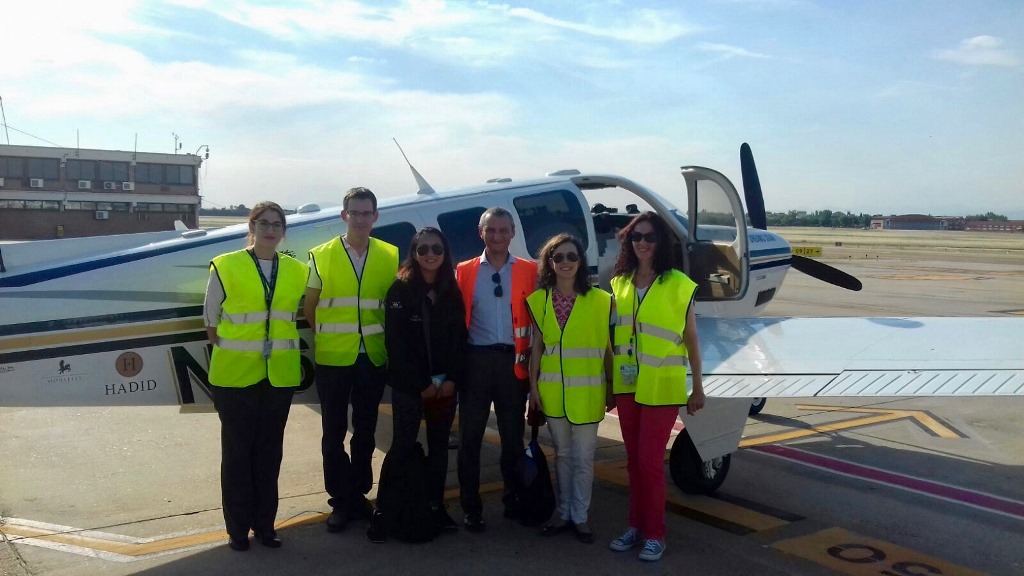 First certified civilian female pilot from Afghanistan is flying solo around the world to promote STEM and aviation education to encourage women to believe in themselves and allow their dreams to soar.

Daytona Beach, Fla.  June 27, 2017:  Shaesta Waiz has accomplished the historic transatlantic crossing early this month, flying solo from St. John’s, Newfoundland, Canada (CYYT) to Santa Maria Island, Portugal (LPAZ) in the Azores in 8 hours, 10 minutes; then flying from LPAZ to Madrid’s Cuatro Vientos airport (LECU) in 7 hours. Both flight legs were completed perfectly and in less time than scheduled.  This is just a part of her solo journey where she plans to make over 30 stops on five continents, in 18 countries – approximately 25,000 miles flown.

Already greeted by fans and aviation enthusiasts in Columbus, Ohio, Montreal, Canada, Madrid, Spain and the U.K., Shaesta is spreading her message of the importance of STEM education for schoolchildren. Her remaining outreach stop in Europe includes Athens, Greece, and then she will continue to encourage the next generation to pursue aviation and STEM-related careers during her outreach events in The Middle East, Asia, Australia and back to the United States.

This adventure is nothing compared to the journey this 29-year-old aviator – the first certified civilian female pilot from Afghanistan – has already persevered. Born in a refugee camp in Afghanistan in 1987, Waiz and her family fled to America to escape the brutal Soviet-Afghan war. One of six sisters in her family, Waiz was raised in an underprivileged area of Richmond, California, where she later discovered an interest in aviation. That’s when everything changed for her.

“She’s an inspiration to all of us – she’s created a spark and a flame in our hearts to live a life giving of ourselves to ensure we positively impact the next generation, our future leaders, and our future communities,” says Lyndse Costabile, Chair for Dreams Soar, Inc.’s Board of Directors. “The global solo flight is only one chapter of the Dreams Soar program, yet one that will leave a footprint on the lives of more than 20,000 young women and men globally.”

While a student at Embry-Riddle Aeronautical University, Waiz founded the Women’s Ambassadors Program in 2011 to increase the female enrollment through a modeled mentor program. In less than three years, under her leadership, the program helped increase female enrollment from 13 to 22 percent. Dreams Soar was born in 2014 by Waiz, now a non-profit organization whose goal is to partner with strong female role models along her flight around the world, and together, promote the importance of STEM and aviation education, globally.

“Every time I open the door of an aircraft, I ask myself, ‘How did a girl with my background become so lucky? The truth is, anyone can be me,” remarks Waiz.

The longest leg of the global flight is Honolulu, Hawaii to Oakland, California, one that extends to 2,091 nautical miles over the Pacific Ocean. Global Partners to this program include ICAO (International Civil Aviation Organization), National Business Aviation Association (NBAA) and BendixKing by Honeywell.

For a complete itinerary of planned stops, information on Waiz and the Dreams Soar team, visit Dreams Soar’s website: www.dreamssoar.org .

Dreams Soar, Inc., is a 501(c) 3 non-profit organization founded by Shaesta Waiz, a dual-graduate of Embry-Riddle Aeronautical University, whose mission is to inspire the next generation of STEM and aviation professionals, globally. The global solo flight is the first phase of Dreams Soar’s worldwide effort to empower the next generation to pursue degrees and careers in Science, Technology, Engineering and Math (STEM) and aviation, specifically for young women and minorities. Supported by her Dream Team of collegiate students and young professionals, Waiz aims to be the first female pilot from Afghanistan to fly solo around the world, and youngest female to do so in a single-engine aircraft. On May 13, 2017, Shaesta launched from Daytona Beach International Airport (KDAB), where the global flight intends to raise additional dollars to award scholarships for young women and men worldwide in pursuit of STEM and aviation education. For more information about Dreams Soar, visit dreamssoar.org.