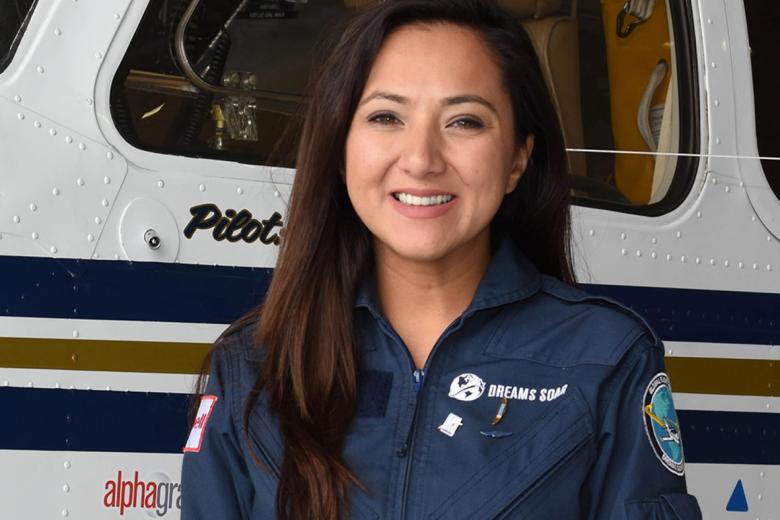 It’s been one year since the first certified Afghan-American female civilian pilot completed a solo flight around the world, but her journey is far from over.

Shaesta Waiz is passionate about flying. But that wasn’t always the case for the woman who’s committed to introducing kids to STEM careers and the wonders of aviation.“The ironic thing is that I grew up terrified of airplanes,” explains Waiz, the founder and president of Dreams Soar, Inc. “Part of the reason is that I didn’t live near an airport, and nobody in my family flew or worked in the airline or aviation industry. My only exposure was aircraft accidents in the news, so I grew up thinking airplanes were dangerous. They fell out of the skies. It was just very scary for me.”

A moment of revelation

Waiz felt somewhat out of place growing up in California switching between Afghan and American cultures. Originally, she planned on settling down and having a family instead of pursuing a career. But that changed when, at 17, she took a plane ride to visit relatives in Florida. It was only her second flight since traveling as an infant when her refugee parents left Afghanistan to settle in the U.S.

“I remember looking out the window and seeing the city where I grew up. For the first time in my life, it gave me perspective to see how small it was compared to the world. As I was sitting in my seat, I felt curiosity. I wanted to know how this aircraft was flying, how it was able to carry so many passengers and how this piece of metal was navigating around the skies.”

After being accepted to Embry-Riddle Aeronautical University, the world’s largest university specializing in aviation and aerospace, Waiz realized her family wouldn’t be able to support her studies. She began to research ways to finance her passion. The school had interest in recruiting and retaining more female students to study aviation and aerospace engineering, so Waiz suggested a women’s ambassador program. Embry-Riddle offered to help pay for her education if she oversaw the program.

“You can fly around the world, and you shouldn't let anything hold you back.”

Inspired by meeting Jerrie Mock, the first woman to fly solo around the world, Waiz was determined to follow in her contrails and do the same. It took Waiz four years to prepare for the global flight, which lasted 145 days, with landings in almost two dozen countries stretching over five continents. She is the youngest woman to fly solo around the world in a single-engine aircraft.

“When I took off, I knew there would be challenges. I was flying in a small plane with no radar and no deicing equipment onboard, so I was restricted as far as where I could actually land, and what parts of the world I could visit. I knew that things would come up that would challenge me as a pilot and a person, and I was ready.”

Concerned about a lack of diversity in her field, Waiz chose to become a role model and advocate for minorities and underprivileged kids to assure them that nothing can stop them from attaining their goals.

“The whole purpose of the trip was to inspire the next generation of STEM and aviation professionals,” says Waiz. “At almost all my stops, we hosted outreach events for kids from all different backgrounds. We introduced them to STEM and aviation careers by showing a video our team put together, and then we would tie in what I’m doing, and it brought the whole message full circle.”

Waiz, a frequent keynote speaker around the globe, says being in an unbiased environment is what she loves most about her job. “Nobody can see who you are or what you look like. The only thing that matters is your ability to fly that airplane.”

She also wants others to know that they too can literally reach new heights. “It’s so important to get the word out that these things are possible. You can fly around the world, and you shouldn’t let anything hold you back.”

Sorry, the comment form is closed at this time.